Episode 32 of Running On Indy is hot! How hot…2,000,000 plus Scoville units hot. You won’t want to miss this live broadcast of the Running On Indy crew and elite runner guests taking on the hottest hot sauces in the world! Oh, and we manage to talk a little bit about running too as our mouths are dying a fiery death.

Episode 31 of Running On Indy is the, “WE’RE NOT WORTHY”, edition featuring LaShawn Merritt! Merritt is a 400 and 200-meter superstar who has represented the USA in three Olympics, earning three gold medals and one bronze medal. He is also one of only five men in history to have broken 20 seconds for the 200 meters and 44 seconds for the 400 meters. Tune in and listen to find out what it takes to be the best in the world!

In Episode 30 of Running On Indy, we talk all things Ultra Marathon with experienced ultra distance runners Brad Baumgartner and Nicholas Balbach. Whether you are just thinking about getting into ultras or a seasoned veteran this episode has something for you.  In other words, an absolute must listen for anyone looking to take their mental and physical pain game to the next level!

Episode 29 of Running On Indy is the Team Shorts takes over edition! Team Shorts is a group of incredible local Indy women who kick butt at running and in life. You won’t want to miss their stories of sisterhood, and just general girl power badassness. Warning: This episode was recorded live at Greeks Pizzeria in Broad Ripple, and some alcoholic beverages may have been consumed during the broadcast. 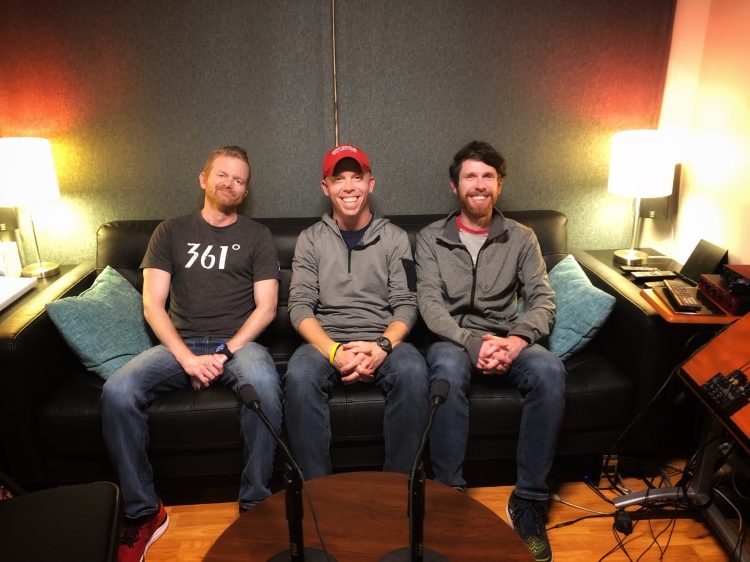 Episode 28 of Running On Indy features the 2018 Indiana Men’s State Track and Field  Championship winning coach Zach Toothman. Zach has been the head Cross Country and Track coach at Avon high school for 9 years. In this episode, we discuss how he was able to change the culture of the program and his training philosophies for young athletes. 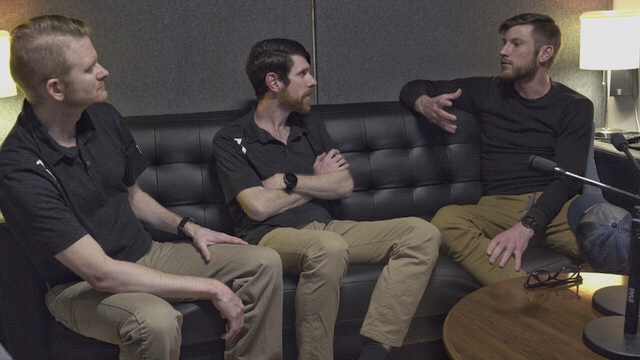 In Episode 27 of Running On Indy, we bring back our good friend Wes Doty for his second appearance on the show. Wes is a true inspiration and is a living example of how running can literally save your life. You won’t want to miss Wes’s powerful message of positivity even in the darkest of moments. And oh yeah, there also is some running stuff in there too.

Episode 26 of Running On Indy features the National Footlocker Cross Country champion Cole Hocker of Cathedral High School. In this episode, we talk with Cole about his training, racing, how to sport a sweet hairdo and much more. Make sure to tune in and get the inside scoop on this up and coming national running superstar. 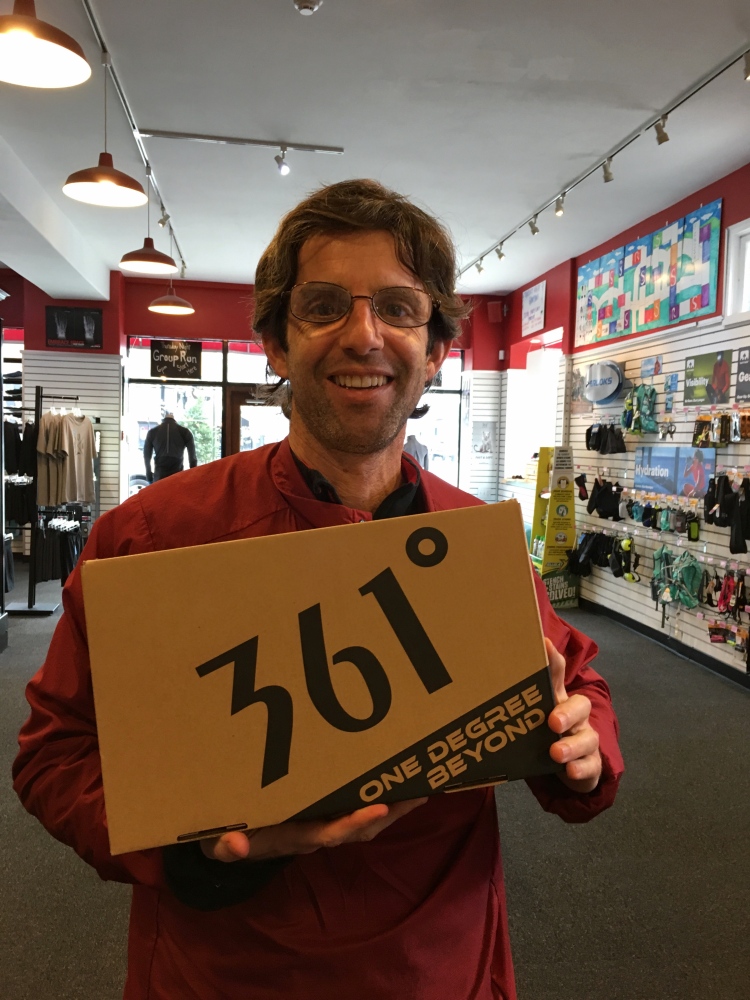 Tune into to Episode 25 of Running On Indy featuring our biggest fan Scott Jacobson. Scott joins us for a casual running conversation and more. Sneak preview…the more might include us doing our best dog impressions!

Episode 24 of Running On Indy features three local Indy women, Anna Webber, Kelby Laughner, and Olivia Ballew, who recently qualified for the US Olympic Marathon Trials. We discuss their incredible running stories and put to rest the age-old debate over sweet vs. dry wine. 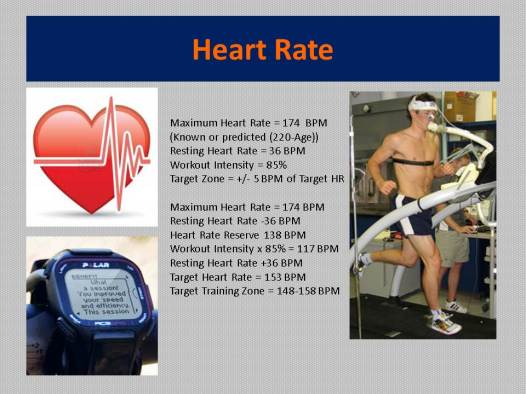 Make sure to tune into Episode 22, The heart rate training doesn’t suck…if you do it right…, edition of Running On Indy. Our guest Coach Matt Ebersole of Personal Best Training makes his second appearance on the show and fills us in on how to train properly using a heart rate monitor. 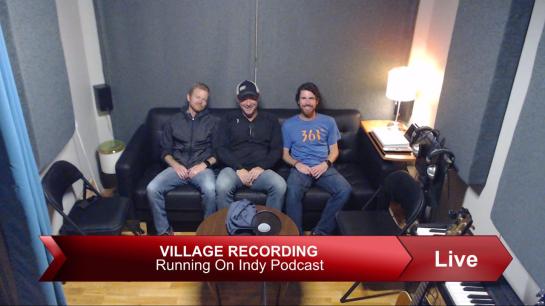 Episode 21 of Running On Indy features Andy Martin, owner of Exclamation Services a Sports Management and Marketing Company. Andy talks about some exciting upcoming USATF Indiana events and Blake and Jesse talk about their recent athletic endeavors on the World Stage. 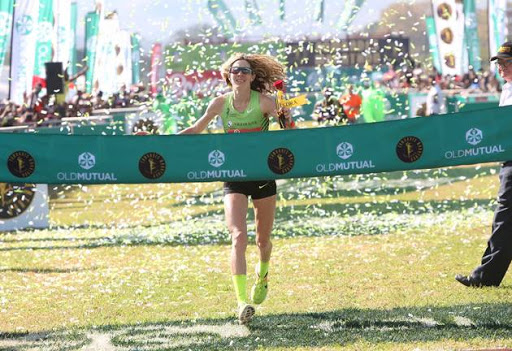 Episode 20 of Running On Indy features the legendary ultra runner Camille Herron. Camille has several world ultra championship wins and world records on her resume, including the fastest marathon time, ever run in a Spider-Man costume. Tune in and listen to Camille’s story on how she has become one of the fastest US female ultrarunners of all time!

Episode 19 of Running On Indy features elite race walker Melissa Moeller. Melissa recently placed 5th at the USA national championships in the 20K race walk and is a 2020 Olympic games hopeful. In this episode she walks us through, pun intended, how race walking began, the difference between race walking and running, and everything in between.

Join us for Episode 17, The Global Running Day 2018 Edition, of Running On Indy! In this episode, we sat down with you, the listeners of our show, as you shared your running stories, both inspirational and comical! 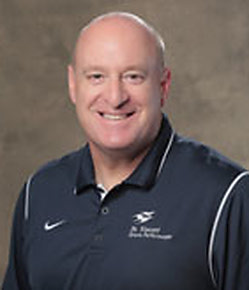 Episode 16 of Running On Indy features renowned sports psychologist Dr. Christopher Carr of St. Vincent Sports Performance. Dr. Carr has over 28 years of applied practice in the area of sport and performance psychology at the collegiate, Olympic, and professional levels of the sport. Tune in to get his insight on how to overcome everything from performance anxiety to deal with running injuries and more.

In Episode 15 of Running On Indy, we talk injury prevention with Physical Therapists Matthew Hamilton, and Anna Thomas of Athletico. Tune in to get tips on how to stay healthy and training hard for your next big race! 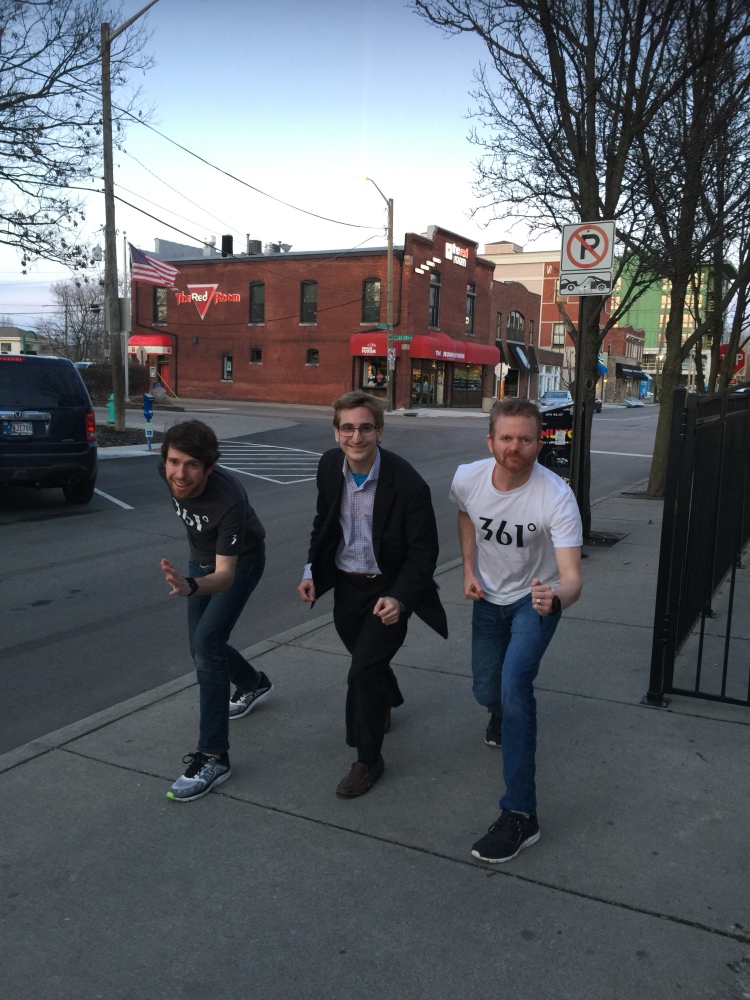 Episode 14 of Running On Indy features Paralympic athlete Ayden Jent. You don’t want to miss Ayden’s story of overcoming Cerebral Palsy to become one of the best Paralympic sprinters in the world! 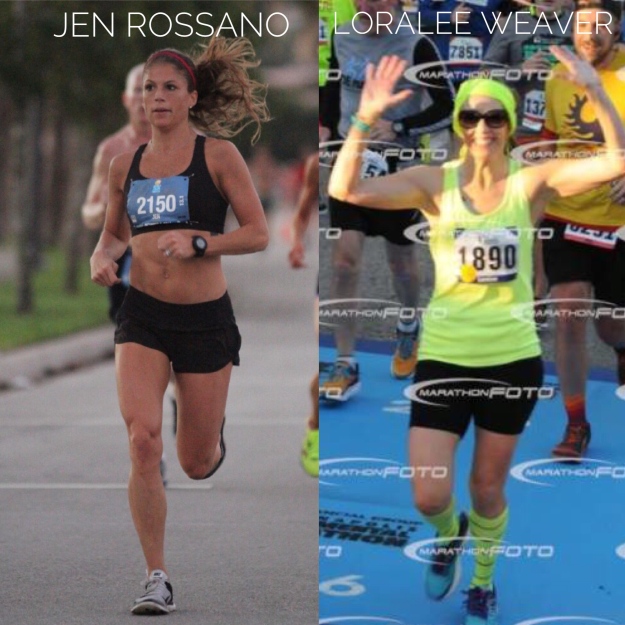 In Episode 13 of Running On Indy, (The Runner Mom Edition), we chat with Jen Rossano and LoraLee Weaver about the balancing act of raising multiple children and running at a high level. Jen is a three-time Boston Marathon qualifier, and LoraLee will be running her first Boston Marathon in April.

In Episode 12 (The Runner Dad Edition) of Running On Indy, we talk with local runners Mike Cole, and Chris Galloway about being a father, and still perusing their running addiction. In addition to being great runners, both men are also successful local business owners and are raising three children apiece. 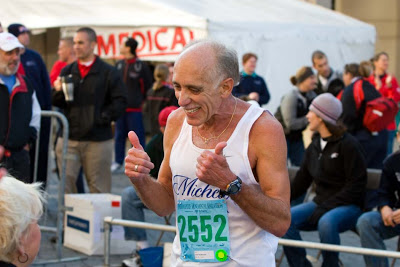 In Episode 11 of Running On Indy, we talk with local running legend Gary Romesser about the challenges of aging and running. Gary holds several American age group records and has won the One America 500 Festival Mini Marathon 5 times. You won’t want to miss Gary’s tips on how to stay motivated and moving while getting older! 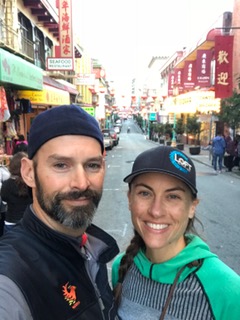 In Episode 10 we talk strength and mobility with co-owner of the Loft in Broad Ripple, (Indianapolis), Doug Robinson. Doug, along with being an accomplished triathlete, has coached thousands of athletes over the years with a balanced approach, focusing on functional movement patterns to keep athletes healthy and competing at their highest level.

In Episode 8 Blake and Jesse sit down and talk with the boys Head Cross Country Coach at Carmel high school, Colin Altevogt. Colin’s team just recently won the Indiana State Championship and placed second at the Nike Midwest meet. You won’t want to miss the recap of both exciting races and more.

In Episode 7 of Running On Indy Blake and Jesse sit down and talk with the Zionsville girls head cross country coach Suzanne Rigg and her daughter Sophia Rigg. On October 29th Suzanne lead her team to Zionsville High School’s first ever girls Cross Country state championship. The team was lead by her daughter Sophia’s 7th place finish. You won’t want to miss these two amazing women talk about this historic race and more.

In Episode 6 of Running On Indy, the He did it!!! edition, we talk with Andrew Peterson who as of November 4th is only the second Special Olympic Athlete in history to qualify for the Boston Marathon. Joining Andrew in studio is his father Criag Peterson, Shadreck Kamwendo the Director for Health and Fitness for Special Olympics Indiana, and Joey McQueen volunteer for the November Project.

Click here, We want to send Andrew to Boston in Style!, to donate to the fundraiser we mentioned in this episode.

Blake and Jesse sit down with elite athlete Noah Droddy in Episode 5. Noah, an Irvington native, has run one of the fastest half marathons by an American in history, with a time of 61:48! You won’t want to miss his story of transitioning from D3 college athlete to a US distance superstar.

We tackle the importance of having a good support network in Episode 4, the Runners Wives Edition. Two lovely women plus some adult beverages equals a great conversation you won’t want to miss! 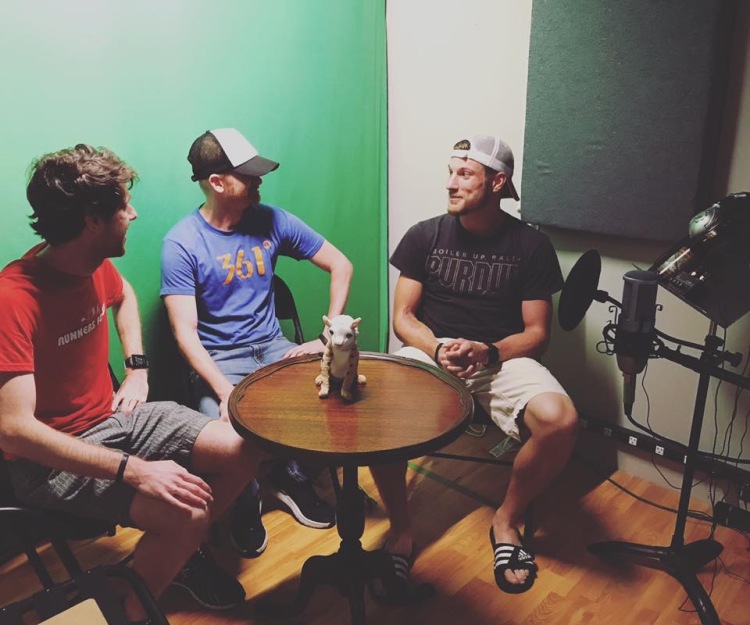 In Episode 3 we have a frank conversation with Liz Navarre, Senior Director for Marketing and Development for Back on My Feet Indy, and Wes Doty, an alumni member of Back on My Feet Indy. You won’t want to miss Wes’ inspiring story of overcoming homelessness and addiction through running.

Episode 2 features our personal running coach Matt Ebersole. Matt founded his coaching business, Personal Best Training, in 1991. Since then he has worked with over 7,000 runners of all abilities. In this episode we chat about everything from the pitfalls of being a new runner, to Matt’s best coaching moments over the years. 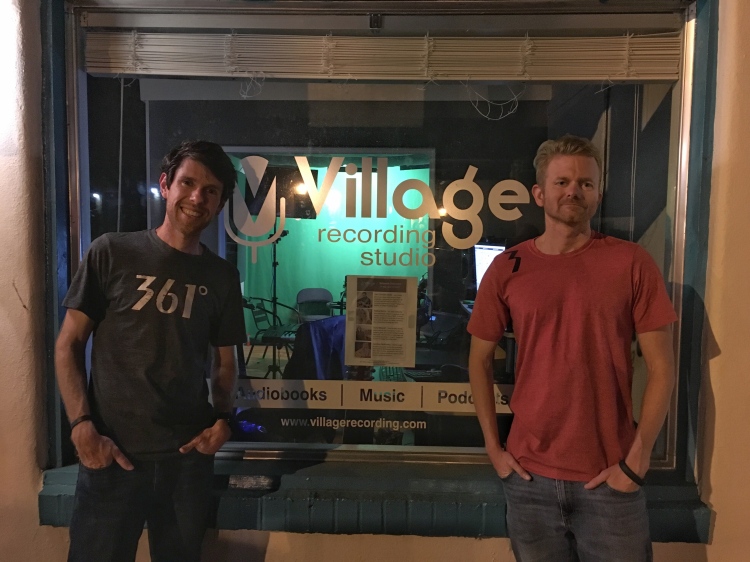 In the first episode of, Runnning On Indy, Blake and Jesse chat about why they are doing the show, and a little bit about there backgrounds. If this were a race you could call this the warm up edition.