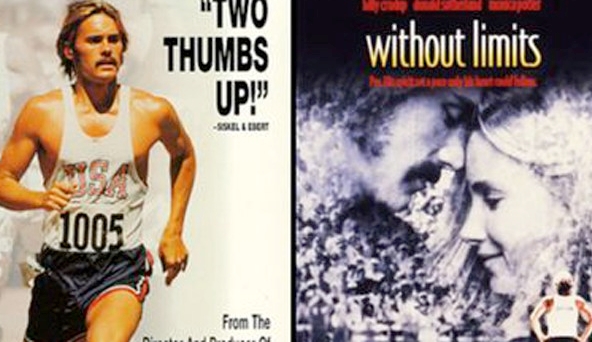 So this is my first ever  blog…hopefully I won’t bore you to death. Depending on the reaction or lack of it, this blog could be my last. LOL. So, anywho, here we go…

Today I’m going to talk  about the differences in the two Steve Prefontaine movies: “Prefontaine” and “Without Limits”. Both are really good and I also own both of them on VHS…which dates my age because  I bought them brand new when they came out, however, I don’t still own a VHS player, so now they just sit and collect dust, because I’m really dirty.  First thing I’m going to clear up is who did the best job  in playing Pre. For me it’s Billy Crudup.  Jared Leto  did a great job, don’t get me wrong, and  Leto is a much better actor overall. However, Leto seemed to lack the fire that Pre had when running. Leto did capture his looks however, which is nice for all the ladies out there. Leto is also much easier looking  on the eyes than Crudup. But, to be fair, it’s like comparing Brad Pitt  and  Tom Cruise in their primes…not to mention both are still  mighty good-looking fellas.  Pre was also considered a ladies man, so right off the bat I gave  Leto  the nod on that due to his great looks.

Now, let’s get more into the two movies. “Prefontaine” with its firepower line up of Leto as Pre  and Lee Ermey  as Bill Bowerman. Ermey is heavily noted for roles such as  the Drill Sergeant from Full Metal Jacket and Uncle Charlie from the Texas Chainsaw movies. So “Prefontaine”  already feels legitimate before hitting play. However, ”Prefontaine”, much like the new Star Wars film, “The Force Awakens”,  lacks the love story appeal compared to  in “Without Limits”. Pre basically breaks up with his high school girlfriend and then later meets a girl on the track team, which is about as far as it really goes. With that said, we are  not watching this movie for the love story anyway. And one thing I like about “Prefontaine” is it was pretty much straight forward with the  athletes talking  about the past and referring back to their experiences with  Pre, which made it really interesting to me.  ”Prefontaine” also did a great job  of touching on Pre’s passion for the sport and how he was a great leader to his teammates.  “Prefontaine” was also the first of the two films to come out and the first legitimate movie to portray his life. For us  runners, when this movie was released, it was like a 12-year-old watching his first porn.  The excitement of this film was unreal.

Now, let’s go ahead and compare the biggest  question about the two films and the differences  of the two films. Did Pre wear his shorts over his tights? In “Without Limits” they actually showed him doing a workout with his shorts over his tights. When they showed that scene my first reaction was like  Darth Vader in “Return of the Sith” NOOOOOOOOOOOOOOOOO! LOL. Unfortunately, that’s actually not the biggest question of the two films.  However, to be fair, if  I had to guess  I would say “Without Limits” was probably accurate in that running tights were not made the same way back then. They were probably more see-through than they are now.  And just so everyone knows, wearing shorts over tights  is frowned upon in the running community.  This is  only with men though. Women know what’s up. They got it figured  all out. We men struggle in this concept.  Just so  I don’t get off topic, this  may spawn a future  blog. LOL.

But moving forward, the real question is How did Pre-hurt his foot before the NCAA championships? This question is still not really completely answered. However, “Prefontaine” gets pretty close, portraying that he hurt himself  jumping off a Lifeguard chair  and hitting the side of the pool.  Another rumor is he hurt his foot in a swimming pool by hitting a bolt.  ”Without Limits” gave the  blame to having sex the night before the race  and hitting his foot on a night stand. Even though I’m sure Pre was having sex the night before his meets as well as partying, he did not hurt his foot that way.

”Without Limits”, like I said earlier, was a better film to me. It was not as accurate, but it had way more drama and it even used real life footage from Pre’s races. Billy Crudup had me from the start because his Steve Prefontaine had the  toughness that seemed right for his personality. I will say that “Without Limits” comes across like Pre made Track and Field to what it is today. As great as Pre was, and as exciting as he was, on and off the track, Track and Field was great at that point already, and  had other  great athletes, just as great as he was during that time and in the past. What I will give Pre however, is he was Nike’s first sponsored athlete. (Little background info: Bill Bowerman and Phil Knight started Nike, which at the time  was called Blue Ribbon Sports).  This made the movie very exciting and  I really  liked it. The love story was a great touch to it as well. Monica Potter, who played Pre’s  girlfriend,  and is known for  the movie “Saw” and  ”Patch Adams” was great. And like Crudup, is easy on the eyes.  Donald Sutherland, who played Bowerman in “Without  Limits”, was mentioned for an Oscar nomination and  made off with a Golden Globe nomination in this film. That being said, to me, he just didn’t  come across as authentic as Lee Ermey did in “Prefontaine”. Lee Ermey manages to feel real and more like what you’d expect from the real Bowerman. But, it’s Donald Sutherland and he is just as much or maybe even more a powerful actor so most people will give it to him.

There are a few more differences  I could get into, but overall, both are great films and even better for a night-before-a-race-inspiration movie to watch. If you are a runner and  have not seen either of these two films, I’m not sure what planet you’re from. Go out and find them and watch them, especially if it’s on VHS and especially the night before a race.  For me personally, I look to a Marvel/Star Wars film, such as , “Return of the Jedi”. But hey, that’s me.

View all posts by roadrunner1514